When children’s author and illustrator Don Tate began work on his latest book, 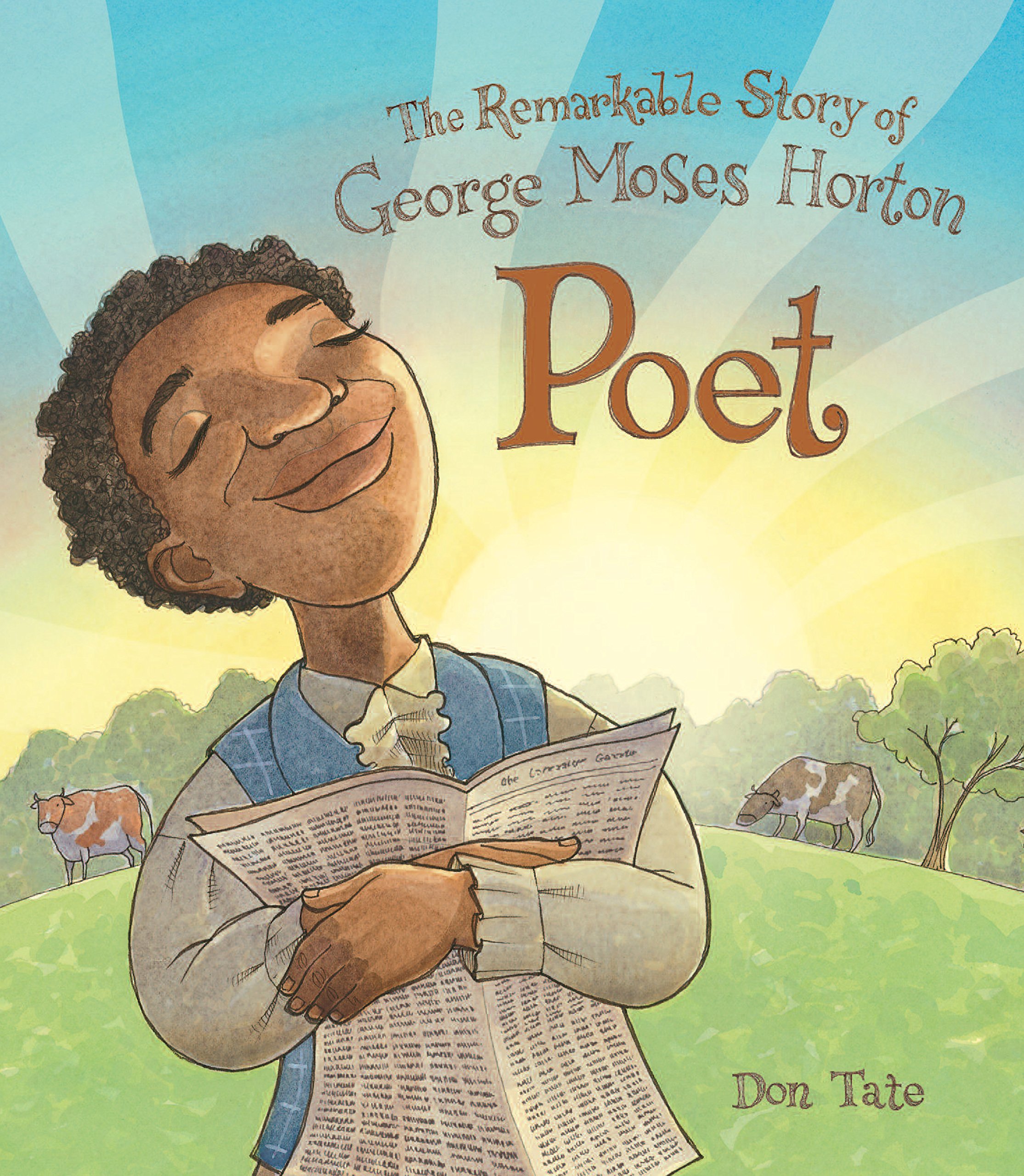 Poet: The Remarkable Story of George Moses Horton, his research started where most does today: the Internet. At a September book launch at Wilson Library at the University of North Carolina at Chapel Hill, Tate told his audience that the Google image results that depict Horton aren’t actually Horton.1 No photograph of the first enslaved black poet — and the “first African American to publish a book in the South” — exists.2

For his inspiring portrayal, Tate had to create his own image of Horton. Similarly, using Horton’s poetry and the biographical points of his life, authors have offered new and differing views of Horton since the early 20th century. But as the portrayals change, readers are left to wonder: Who was George Moses Horton?

The uncertainty that surrounds Horton begins with this birth as neither the exact day, month or even year were recorded. Scholars accept that he was born in about 1797 in Northampton County, in northeastern North Carolina, on a tobacco farm owned by William Horton.3 Primarily working as an enslaved laborer on a Chatham County farm until the 1830s, Horton enjoyed the ability to travel north to Chapel Hill on weekends to sell fruit — and his poetry — beginning in 1817. By the 1830s, he “hired his time” from his master at 25 cents a week and worked for UNC president Joseph Caldwell in Chapel Hill while also selling love poems to students who would give them to their girlfriends.4

Horton’s enslavement has been described as “mild” or “not bad” because of his relative freedom, but at UNC, he was considered a “campus curiosity.”5 While students commissioned his poetry, they also “pranked” him — along with other “country servants” — telling him to “spout” or orate for their amusement. To the same end, they also coaxed Horton to drink to excess.6 When he delivered the oration “An Address. The Stream of Liberty and Science . . .” to the freshman class of 1859 in Gerrard Hall, one wonders how sincerely his mix of “fatherly advice to students, praise of learning and knowledge, political opinions, and snatches of poetry” was received.7 Horton failed to free himself in 1829 with the profits from his first published volume, The Hope of Liberty, but he continued to compose poetry for his freedom.8 To publish his third book in 1845, The Poetical Works of George M. Horton, Horton raised funds from 99 subscribers — including UNC students, the mayor of Chapel Hill and other notable community members.9 The list of supporters also included UNC President David Lowry Swain; When Horton wrote to Swain to purchase his freedom in the 1850s, however, his letter went unanswered.10

As with his birth, records leave no definite information about Horton’s death. Scholars believe that after leaving North Carolina with Union forces in 1865, Horton settled in Philadelphia, where he last appears in any records in 1883.11

Not until after the turn of the century, as Southern states erected monuments to Confederate soldiers and as Jim Crow began to rise, did Horton reappear. In 1909, UNC professor Collier Cobb dedicated 10 pages to Horton in The University Magazine, comparing his work to Elizabethan poets yet questioning his desire for freedom:

“George never really cared for more liberty than he had, but he was fond of playing to the grand-stand. It was a common saying in Chapel Hill that Poet Horton owned Mr. Horton and all but owned the president of the University.”12

In 1917, Benjamin Brawley sympathized with Horton’s plight to earn his freedom and lauded his “undoubted gifts as a poet;” he also misrepresented UNC students’ kindness toward Horton.13

Other critics dismissed Horton’s work. In 1931, Vernon Loggins described his poetry as “primitive” and “imitative and affected.” A 1939 J. Saunders Redding review “said Horton’s antislavery poetry was selfish and conceited, and his historical importance ‘as the forerunner of the minstrel poets’ outweighs ‘whatever of intrinsic poetical value his poems possess.’”14

In The Black Poet, the only book-length biography about Horton, published in 1966, author Richard Walser repeated previous criticisms of Horton’s poetry. Joan R. Sherman, professor emerita of English at Rutgers University and an African American poetry scholar, criticized Walser for “[heaping] only vituperation” on Horton and for describing him as a “sycophant, poseur, buffoon, troubadour in motley, jubilant harlequin, egoist, opportunist, and braggart.”15 Sherman’s work in the 1970s positively remembered Horton, historically and critically. A chapter in Invisible Poets focused on his “poetic strengths,” and her 1997 book, The Black Bard of North Carolina: George Moses Horton and His Poetry, aggregated biography, poetry and critical interpretations for a comprehensive look at Horton.16

“In the last few years, we have been studying our history as a university community in new and different ways. Our intent is not to revise history, as some have charged, but to add to it, to reach back and to retrieve the many strands of our history that have been dropped or ignored along the way.

“By adding the name of George Moses Horton to the campus landscape in a permanent way we acknowledge a great talent who sprang from this community. We also acknowledge countless others who went before us and who, in his or her own particular way, shaped this institution and made it what it is today.”17

And in lending his name to a new building, Horton provided a superlative: UNC was able to claim its place as “the first major predominantly white university to name a building for a slave.”18

In all of these varying accounts of Horton and the times in which he has been re-evaluated, the question arises: Who is George Moses Horton and who will he be next?

The photo that appears in Internet searches actually depicts Martin Delany, a African-American abolitionist and an early proponent of black nationalism.

[6] George Moses Horton, The Poetical Works of George M. Horton, the Colored Bard of North-Carolina to Which Is Prefixed the Life of the Author (Hillsborough, NC: Printed by D. Heartt, 1845), xiii-xvi.